Why is it important to control weeds in new leys?

Reseeding is essential for maintaining productive grassland, but with the cost of a reseed averaging £400 to £700 per hectare, it’s a significant investment. Selection of suitable grass varieties, creating a good seedbed and ensuring adequate soil pH and nutrient availability, are all key to establishing a new ley successfully. And once grass is sown, protection from weeds becomes just as important and boosts the long-term success and performance of your investment.

“Problem weeds will inevitably germinate as a result of soil disturbance when sowing a new grass ley”, says Dave Gurney, Field Technical Manager for grassland crop protection products at Corteva. “These weeds are prolific so germinate and spread rapidly, taking the place of valuable grass, reducing its productivity and quality from the outset.”

Even at low populations, weeds such as docks, thistles and nettles pose a significant threat to grassland productivity as they compete directly for light, water and space, as well as smothering out more nutritious grass.

The detrimental effects of weeds, such as docks, is also seen in silage. Trials carried out by SAC Consulting showed a 10% infestation of docks caused a 10% loss of grass yield. Also, the presence of docks in silage not only reduces overall yield, but also brings down its feed value. Docks have around 60% of the feeding value of grass, meaning 40% of potential feed value is lost. To compensate for this nutritional shortfall, you may need to buy additional, supplementary feed.

“An added problem when baling dock-infested silage is the tough stalks can puncture the plastic wrap,” explains Dave. “This lets air in, adversely affecting the fermentation and creating potentially dangerous moulds and unnecessary spoilage.”

In established grazed pasture, spiky thistles reduce the area livestock will comfortably graze, leading to even more wastage. Thistles can also increase the spread of infectious diseases, like Orf in sheep.

The control of problem weeds, such as docks, thistles, chickweed, buttercup and dandelion, is much easier and cheaper when they are small. The roots have not had time to propagate or the chance to grow bigger and deeper. So, the key is to tackle problem weeds early before they damage the performance of a new ley. Even low populations of perennial weeds need to be dealt with before they become a more significant problem.

“While it’s tempting to leave small populations, doing so runs the risk of them building up their root reserves and taking over the grass,” continues Dave. “Chickweed is particularly good at this. It can easily smother out grass and colonise bare patches caused by poor establishment, poaching and slurry smother.”

“Weed seedlings are more susceptible to herbicides than mature plants and are cheaper and easier to control, so tackling grassland weeds through an early application of herbicide is crucial,” stresses Dave. “This herbicide application is the most cost-effective spray a farmer will carry out in the life of a new ley.”

Spraying early in the life of a sward ensures a clean start and allows grass to establish quickly, without competition from weeds.

“Delaying that first spray is simply not cost effective,” says Dave. “It is more expensive to spray mature, fully-established weeds and by then, the productivity of the grass can already be affected.”

Many grassland herbicide products dictate grass should be ’established’, ie. over a year old at the time of treatment. But products are available for use in new sown grass leys applicable from as early as the three-leaf growth stage. The decision treein figure 2 can help determine the best product to use. 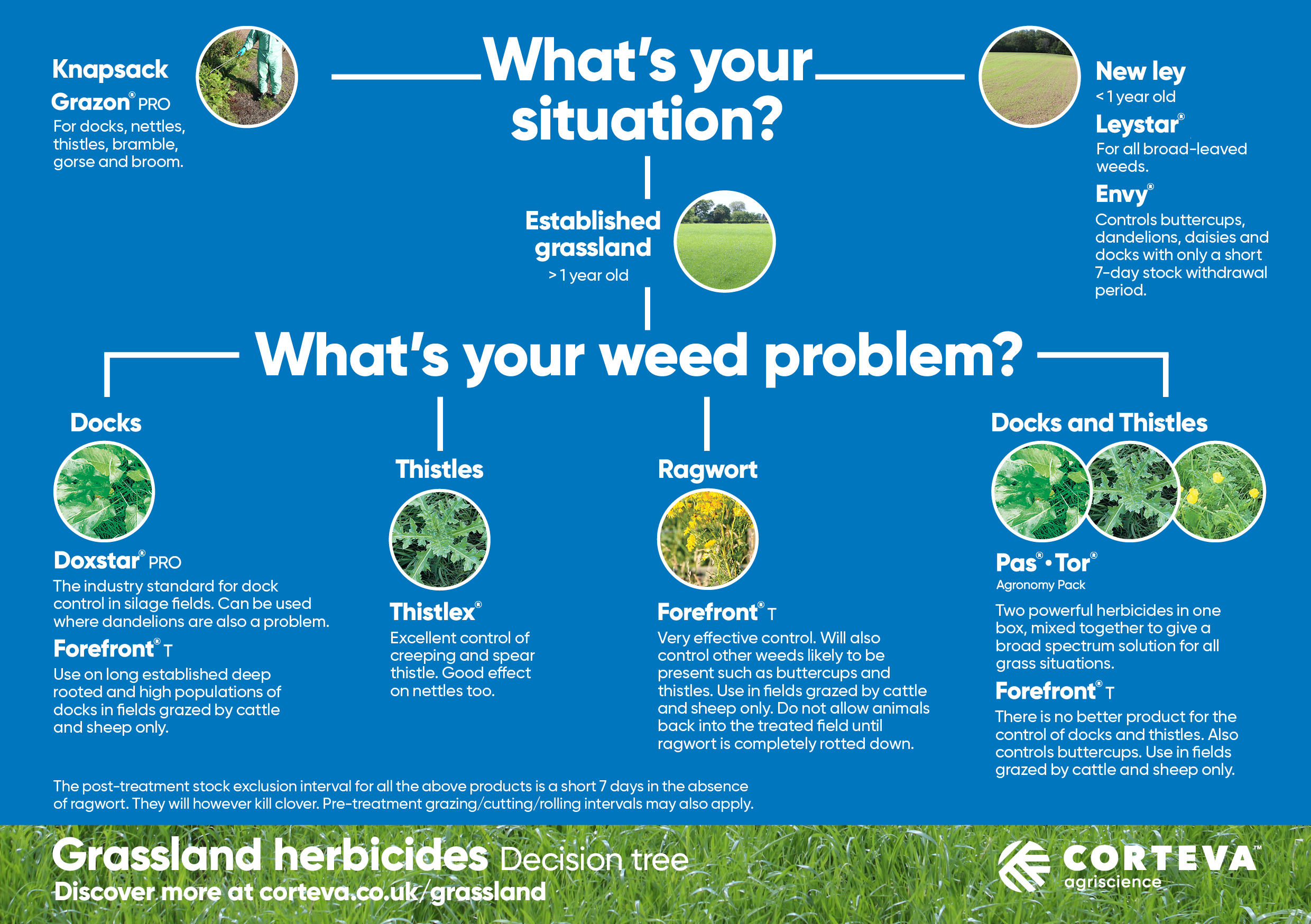 “Envy and Leystar are both selective herbicides for use in new sown leys,” explains Dave. “They kill weeds down to the roots and the best time to apply them is when weeds are small and growing actively. This is six to eight weeks after reseeding when there are three leaves on the grass.”

“Clover in a new ley does complicate weed management. Leystar and Envy are not safe to clover, but it can be stitched in three months after application. For established grassland, Squire Ultra is a clover-friendly option to consider if the weed problem is favourable.”

After selecting the right herbicide, making sure you apply the correct amount at the optimum time is critical for success. With most farmers opting to use spray contractors, timing is key.

“Herbicides should be sprayed on actively-growing weeds,” explains Dave. “Book your contractor as soon as a weed problem is identified to avoid missing a spray opportunity in the important developmental stage of a new ley.”

“In spring, monitor new reseeds closely to see if they need treating. If they do, act quicky to tackle the problem before it damages the performance of new leys,” concludes Dave.